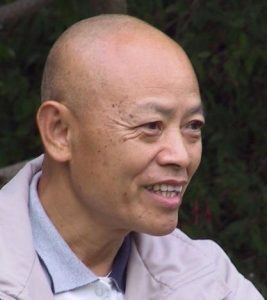 Dr Lin Feng Chao was born in Taiwan in 1948. His interest in traditional Chinese medicine began because of various health problems. As a teenager Dr Lin attempted to improve his health by practising various martial arts. During the weekends he studied Shaolin Kung Fu, Ba Gua Chang, and Hsing I with different masters. Only later did he discover Tai Chi.

He practiced diligently and after only two years his health improved significantly. This was the beginning of his lifelong dedication to Tai Chi.

During this same period Dr Lin became interested in Tui Na. A technique used by martial arts masters to massage their students when injured. This form of treatment works directly on the body’s metabolism. If practiced correctly it can cure many ailments. For a couple of years he studied Tui Na with an old Chinese refugee living in Taiwan.

In 1969 Dr Lin’s teacher moved to Canada and suggested he became a student of the legendary Cheng Man-Ching. Besides his Tai Chi, Dr Lin also studied acupuncture and Chinese medicine under Cheng Man-Ching. He remained with him until his death in 1975.

When Dr Lin moved to South Africa in 1989, he had already taught hundreds of students in Taiwan. And had gained the title of Grandmaster of Tai Chi. Living in Cape Town Dr Lin has acquired a reputation for his skill as an acupuncturist.

Although his main focus is on acupuncture, Tai Chi is a vital aspect of Dr Lin’s healing art. He feels it’s essential that an acupuncture practitioner should first learn Tai Chi. To gain the necessary sensitivity to interpret a person’s energy. In the past, anyone who wanted to learn acupuncture had to fist learn Tai Chi for a few years.

Learn Tai Chi – Free Introduction Class and benefit from the many health benefits.

I run a Free Introduction class. More info at Tai Chi On The N2

I’m based in Sedgefield. Map link