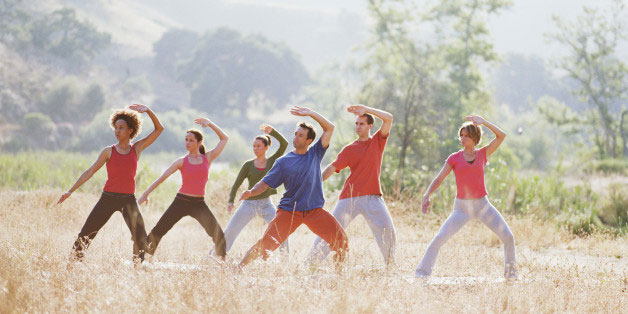 This was a great post via the Huffington Post wonderful tool to calm the mind. Americans have no difficulty adopting ancient practices into their health regimens. Take yoga, the ancient mind-body practice and contemporary fitness craze (and $27 billion industry), which continues its prominence in the mainstream — even after decades of increasing popularity. Many forms of meditation, likewise, have been touted for stress-relieving, health-promoting benefits by prominent leaders in business, media and the arts. And then there’s tai chi, this ancient martial art of Tai Chi can fight disease.

Like yoga, tai chi is a type of moving meditation — a gentle exercise that focuses on the breath and prioritizes ease of movement— that comes with a host of health benefits. And, like yoga, there are distinct styles and lineages of tai chi along with more modern and hybrid incarnations.

Many of the tai chi moves tell stories and involve mimicking animals — featuring names like “Embrace the tiger and return to mountain” and “White crane spreads its wings” — all performed with relaxed muscles and ease of movement. Through maintaining focus on the breath and physical movements, the practitioner is thought to be able to help to direct the flow of Qi, or life force, in the body.

The practice originated over 2,000 years ago in China as a martial art called T’ai chi ch’uan. It is said to have been created in the Wu Dong Mountains by a Taoist priest, who observed a white crane preying on a snake and then mimicked its actions. Today, tai chi is known as a low-impact exercise popular with older adults and practiced by over 2 million Americans each year. Harvard University has even devoted a research program to studying the health benefits of the ancient Chinese art.

“In this high-tech world that’s all about speed, greed and instant gratification, tai chi is the antidote to bring us back to balanced health,” Arthur Rosenfeld, tai chi master and author of Tai Chi: The Perfect Exercise, told Reuters.

Here are five reasons why tai chi could very well be the “new” yoga.

It helps prevent and fight disease.

“A growing body of carefully conducted research is building a compelling case for tai chi as an adjunct to standard medical treatment for the prevention and rehabilitation of many conditions commonly associated with age,” Peter M. Wayne, Harvard Medical School professor and director of the Tai Chi and Mind-Body Research Program, told Harvard Health Publications.

It’s as beneficial for the mind as it is for the body.

In addition to relieving stress, tai chi is also scientifically proven to help fight depression among the elderly.

In tai chi, the focus of the mind is on the breath and the physical sensations in the body, which can help to still racing thoughts and increase body awareness. These meditative aspects of the practice help to bring the practitioner many of the same cognitive benefits of traditional seated meditation, including an increased sense of awareness, calm and well-being.

Tai chi may also help to boost well-being by improving both the length and quality of practitioner’s sleep. A 2008 UCLA study found that practicing tai chi chih, one particular variation of the practice, was effective in improving moderate sleep complaints among older adults. It also reduced drowisness and inability to concentrate during the day.

It can help you age gracefully.

Tai chi can help improve flexibility and promote a health range of motion in older adults, while also building muscle strength. What’s more, women at risk for or suffering from osteoporosis should take note that research has found tai chi to be effective in increasing mineral bone density.

Tai chi could also be one of the most effective methods of promoting good balance and preventing falls in older adults, according to WebMD. Research from the National Institute on Aging found that tai chi reduced fear of falls and risk of falling among older adults.

It can teach you how to slow down — and how to let go.

The term tai chi itself indicates the harmonious union of opposing forces — and it’s all about going with the flow and moving fluidly within your own physical limitations.

In tai chi, “the objective is not to over-exert or strain one’s natural state, but to achieve unity with one’s essential nature, thereby releasing the body’s intrinsic energies,” writes Simmone Kuo in Long Life, Good Health Through Tai-Chi Chuan.

It’s accessible to almost anyone.

Tai chi isn’t just for older folks, this ancient martial art of Tai Chi can fight disease. It’s low impact, but anyone can enjoy the numerous health benefits of the practice. Even those who are in poor health can begin a tai chi practice and potentially improve their physical condition.

The practice can even be adapted for those in wheelchairs or recovering from surgery, according to Harvard Medical School experts, and it has been shown to improve balance and motor control among individuals with Parkinson’s Disease. The ancient martial art of Tai Chi can fight disease.

I was fortunate enough to have started Tai Chi a moving meditation at a very early age. Practising Tai Chi for over 25 years has allowed me to build a solid foundation to support the most important aspect of EQ development, which is attention training.

If you are interested in supporting yourself or helping the teams you manage, the links below can help you learn more about EQ training.